For the past two months, I’ve been teaching a Radical Arts course at a local high school. Every Wednesday afternoon, I get together with a group of 10-20 students and barrage them with what I hope are new and interesting ideas. Rather than present the material as a historic thing (i.e. “Dada began in 1914 and ended in 1921”) I talk about it like different streams of rebellious energy that you can still tap into. Surrealism, for example, seems to be alive and well this year with the resurrection of David Lynch’s “Twin Peaks” (and also interesting to note the visual references in that show to surrealist artists and writers like Marcel Duchamp, Meret Oppenheim, Francis Bacon and Franz Kafka).

It’s an eight-week class, presented mostly as lecture and presentation, though I’m continually trying to find experiential exercises in which the students can participate. Many students reported that they liked the “drum and drone” we did in one class, where we attempted to alter our consciousness through playing music together. In a two-hour class, it is a challenge to present a summary of something (like Performance Art) and then just say, “okay, now YOU do it.” It’s been my experience that the students are still reacting to and digesting the sounds, images, and ideas of what’s being presented to them.

But what are “the Radical Arts?” Well, for starters, it’s just something I made up; a title that provides a kind of unified field theory about the things I’ve been obsessed with for most of my life. For me, “Radical Arts” includes art movements like Dada, Surrealism and Fluxus, Performance Art and Ritual, Experimental Literature and Banned Books, and musical genres like Punk, Post-Punk, and Industrial. Not to mention pretty much everything that went on musically and artistically in the late 60’s (which I actually haven’t taught yet as I’m still looking for a way to distill it into a two hour presentation).  The string that ties all these things together is a sense of rebellion; a notion that things can and should be different than they are.

One could easily teach an entire course on any one of these subjects; my goal is to give the students a taste of this or that, provide them with a context for the ideas, and encourage them to get creative and experience these things for themselves, whether it’s starting a punk band, or exorcising their demons through a piece of performance art. 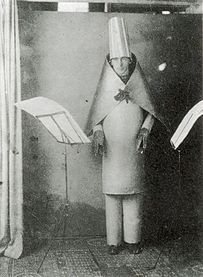 This is not an “anything goes” type of environment, but I do acknowledge students that capture the spirit of the subject being presented. During the Dada collage-making exercise, one student created a collage, then rolled up the paper and tied it up so the collage couldn’t be seen–in some ways, this was a perfect expression of Dada. And just yesterday, in the class on Surrealism, one girl wanted to scrawl “Satan was here” on the classroom mirror. Naturally, I discouraged that, but when she amended it to read “Satan wears Gucci,” I let it stand and gave her kudos. She understood that one of that characteristics of Surrealism was combining images or ideas that don’t ordinarily go together.

So what’s the point of all of this?

People who know me, and readers of my (admittedly very occasional) blog know that I’m a believer in the power of The Arts to heal. I feel that teenagers probably need these tools to express themselves more than anyone else. And that the teenagers that need to express themselves the most are not going to settle for drawing pictures of houses, or watercolors of flowers. They won’t go for endless revivals of Broadway musicals at local dinner theaters, but they might respond to the ideas of Antonin Artaud, or The Living Theater. Carl Sandburg may not speak to them, but Allen Ginsberg just might. These are dark and uncertain times, and sensitive people feel it. Without an outlet for expressing what they feel, they run the risk of being depressed and/or turning to lethal drugs. As a therapist, I’ve seen the damage people do to themselves when they have to keep an essential part of themselves a secret. With an exposure to what may seem like strange ideas in atmosphere of openness, people learn new ways to express themselves and also increase their ability to solve problems. Art can be empowering, fun, life-affirming and (usually) legal.