A recent article in the New York Times stated that creativity was the new midlife crisis “thing.” Instead of the now-cliched responses to midlife, like buying a sports car or having an affair with someone younger, the article noted how people were instead enrolling in painting classes and taking singing lessons.

The article spoke to me as I’ve recently started painting–although to even say the word “painting” sounds way more serious than anything I’m actually doing. “Experimenting with colors and textures” might be a better way of putting it, or perhaps just “playing with color.”

It has been something of a challenge for me to move from the world of music and sound, where I’ve been productive and knowledgeable, to a medium that I know virtually nothing about–or certainly nothing technical. The movement from being accomplished to being a complete beginner is sometimes a difficult transition for the ego to make.

Play is a hugely important–and often overlooked–component of mental health. I’m not talking about play in the sense of say, competitive sports, but play that comes from the sheer joy of just playing. For some of us, even our creativity can become far removed from play. It can solidify into a job (i.e. fine artists who become graphic designers) or it can be swallowed in feelings of perfectionism and insecurity that our art or music “isn’t good enough.” Those places where you drink wine and paint what the instructor shows you don’t really encourage creativity or true play.

As adults, we have limited opportunities to really play, in the healthiest sense of the word. So I’m not surprised that many people are turning away from the stress of their corporate jobs and trying to express themselves in ways that can definitely more fun and fulfilling.

My own mid-life crisis (which, to be honest, has been going on for at least 25 years) recently took me to Santa Fe Drive in Denver to see what was happening in the galleries and studios there. I had recently purchased a marbling kit and experimented with putting drops of color into water and laying a sheet of paper in the water to soak up the colors in a kind of psychedelic fashion (though marbling pre-dates psychedelic art by at least a century; it was a style often found on the insides of books from the late 1800’s). 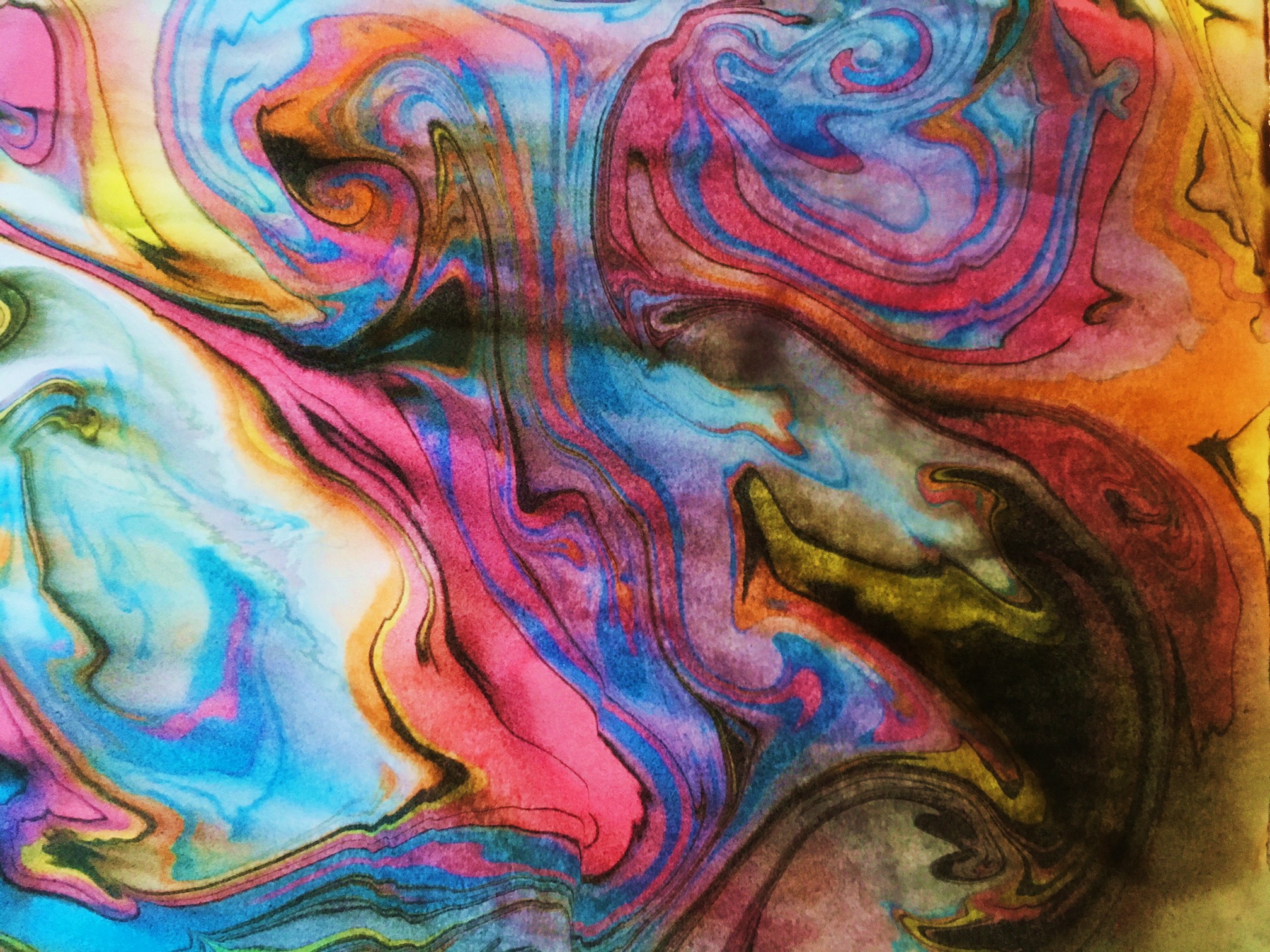 I looked in the window of a shop called Candelaria and found exactly the kind of art I had been looking for. On the wall of the shop hung a series of paintings that were stormy, dreamy and sometimes otherworldly (they were also reasonably priced). I knew there was one for me, and I found it in a stack of paintings that hadn’t been hung yet. It was a small painting, largely composed of that shade of blue in which I can get lost. I turned it over and noticed that the title of the painting was “Blue Destiny.” After staring at it for a while, I thought that I would like to make music that sounded the way this painting looked. Two nights later, I did; an 18 minute long experimental piece where I tried to capture what I saw in the painting. It was easy.

But I had yet to try my hand at actually painting. As Blue Destiny would have it, the woman who owns the store–and did the paintings–also ran a class where she taught this technique. Known as “pour painting” it involves pouring individual colors into a cup where the colors, somewhat remarkably, stay separate. When you pour them out onto a canvas and move the canvas around a bit the colors dance around each other without actually blending. That’s just the basics; from there you can take it in any number of directions. The class was also reasonably priced, and I came away with three small canvases, happy with the results. 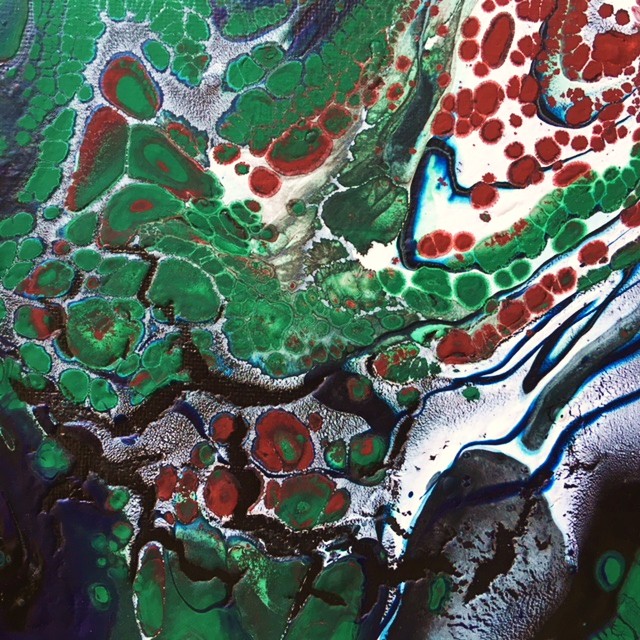 If you’re the kind of person for whom control is important, pour painting is not for you. Or maybe it’s just what you need to get yourself to really play again! It is a very random process that I don’t fully understand; sometimes you get something pleasing to your eye, sometimes less so. You have control over the colors you use, and there are probably many other ways to exercise slight degrees of control (i.e. how thin or thick you make the paint) but there will always be a strong element of chance when you’re pouring colors out onto a canvas. It’s not like using a paintbrush and skillfully painting a picture of a tree. The musician in me likens it to a form of improvisation, or the chance compositions of John Cage.

I showed the technique to my seven year old daughter, who ran with it in ways that I couldn’t. One night, having no canvases available, we painted on old records. My pour was bright, but careful. She went right for the fluorescent colors, and after she poured the paint she started to move it around further with a palette knife (I would never think of taking a knife anywhere near a record). Similarly, when we did marbling together, while I was gently blowing the colors around in the water, she just got right in there with a stick and stirred the water around. “You can’t do that,” I wanted to say, but held my tongue when I realized she was simply better at playing than I was. It’s a cliche to say that kids are naturally creative, but it’s true, at least in this case. And maybe we all have things to learn from teachers who want to teach us the way to do something, and children who want to show me the alternatives.